What are you actually hearing? Unless the construction and treatment budget was pretty sizeable, control-room acoustic deficiencies are a crux nearly every engineer deals with. Absorption and diffusion are key to flattening the response but often, listening environments still need some tender loving care. Sonarworks doesn’t make chicken noodle soup, but they do offer a prescription that  might be what the room needs. I was recently able to take Sonarworks for a test and found the results in one of our mixing suites at Capital University fairly astounding. While great sounding monitors in a well-treated room are always the goal, using Sonarworks may be an affordable solution to greated mix translation outside of the control room with increased stereo imaging, and flattened frequency response. 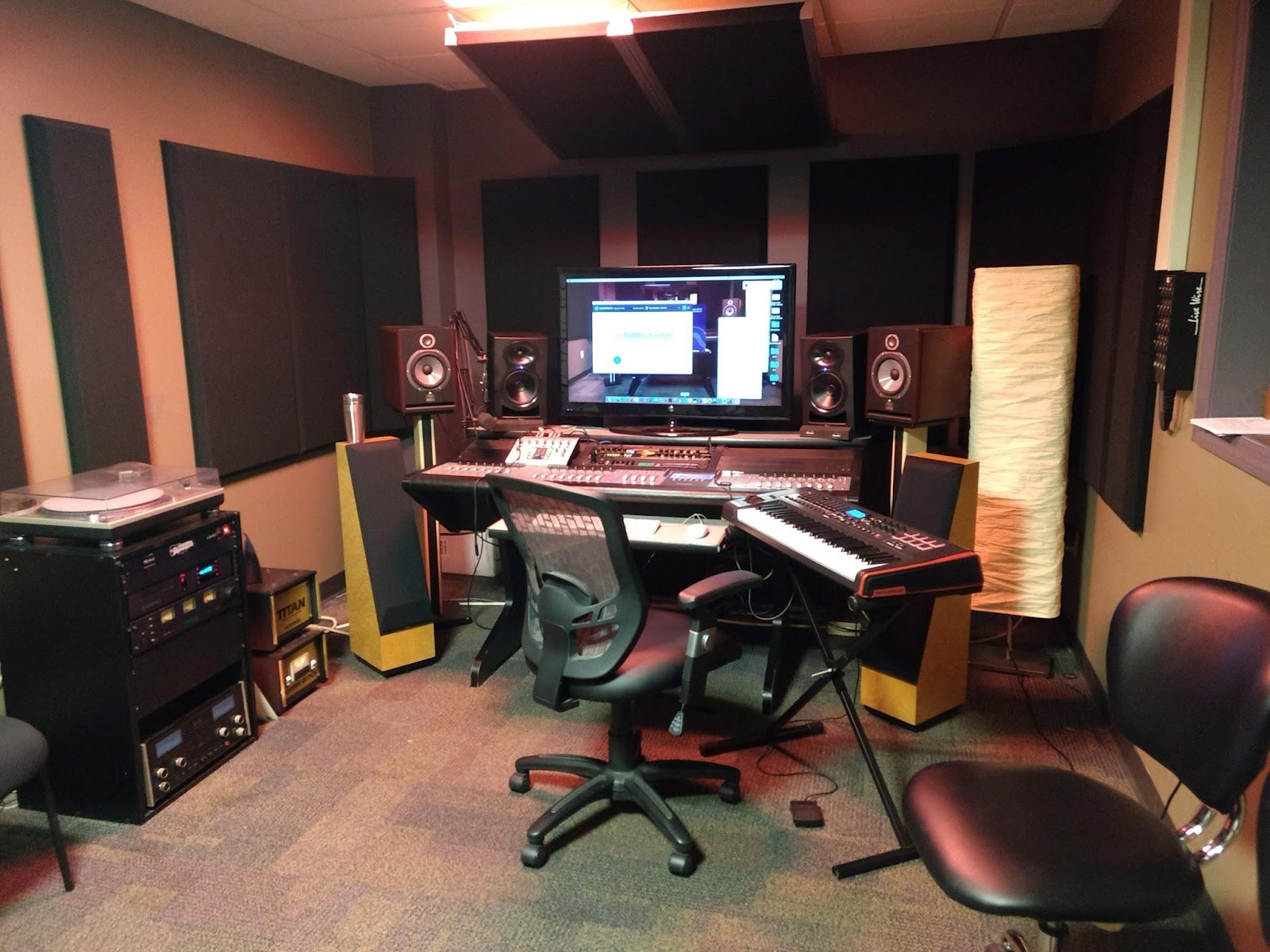 Spread over two buildings, Capital University has 3 tracking studios and 6 mixing rooms. One of my favorite listening spots in Studio C, as this mixing room is comfortably out of the way and I can mix undisturbed for hours, yet big enough to allow a visitor or two. Plus, the studio also has a Technics 1200 turntable for some interesting a/b listening. Focal Solo6s are the main monitors and recently a pair of Kali Audio LP-6s were added; both solid monitors with great reputations. I have mixed several projects here and (I thought) the mixes translated well outside of the studio.

Sonarworks came knocking. Even knowing what I know with phase, the speed of sound, etc - the setup process is pretty cool. The software installation and setup is well documented elsewhere on the web so for a more in-depth look, check out YouTube. The installation mic is pointed at the speakers and dozens of spots around the mixing space, and the software takes a snapshot of the current frequency response.  Ten minutes or so working with the software and Sonarworks did it’s easy-as-pie thing. The image below shows the resulting room frequency response as measured by Sonarworks. 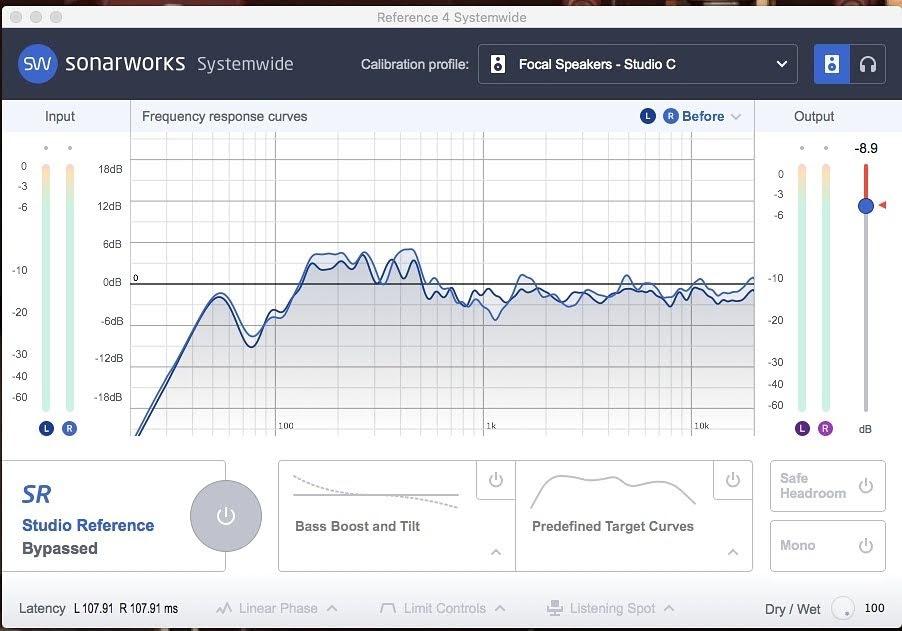 From this curve, two things jumped out at me; there is a severe dip around 80 Hz and the disparity between the left and right speakers and five notable areas. Engaging Sonarworks correction mode, the software takes the measurement of the room and imparts the opposite curve to flatten the frequency response. The resulting curve is below with the green line representing the “fixed” curve for Studio C. 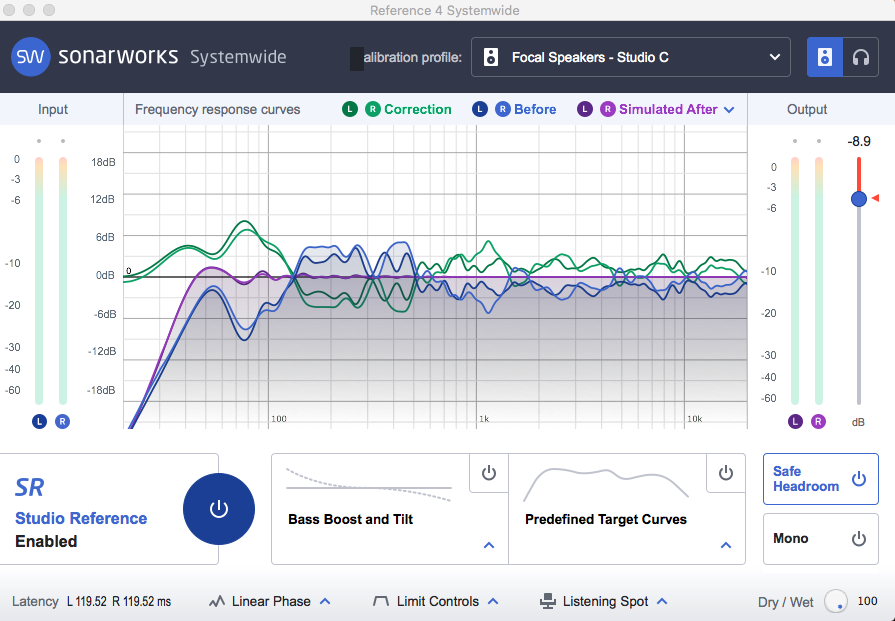 What did this mean for listening in the new space? Once I picked my jaw up off the floor, there were four things that immediately were not-subtlety noticeable.

The left/right spacing was the most unexpected. I was not thinking I would hear a wider stereo image but there it was; without touching the speakers. This widening of the listening sweet spot was the most incredible aspect. In playing back songs and mixes, subtle background vocals that were hidden or masked revealed themself.  This was so cool!

Clearly the low end was tweaked. I have a playlist on Spotify of drool-worthy drum sounds and this playlist gained immediate punch with the increased body and thump in the kick drum. This effect did not sound hyped or fake - in my listening this seemed closer to what the production team and artists had in mind.

What’s sonically weird is that even with this “fixed” curve, the bass wasn’t overpowering and the mixes didn’t get darker. That’s most likely from cut to the low-mids - an area I was probably over-cutting in my mixes. So the mixes and listening experience got sweeter - not boxier.

Looking at the curve in the 1kHz area,  one might think the vocals would pop out a bit more. Yes-ish - but what I heard was what I loved about my older KRK monitors. THe KRK’s were the reverb truth-tellers; if the reverb was not the right reverb, the KRKs would let me know. The subtle tweaking around the high-mids and highs helped bring reverbs and subtle delays to the forefront a bit more in a way I liked. Vocals suddenly did not sound like they were in cave or bathroom - but the space around the vocals became a bit more noticeable without getting spitty or sibilant. In one mix, the reverb I had picked sounded even cooler. In another though, I wanted to back off the send a bit, and increase the pre-delay. Nothing major but issues I might have not heard until a headphone listening test.

So am I a believer? We installed the software in another much bigger control room and were not quite as thrilled with the results. And that’s sort of that issue with that space - listening sounds different in just about every square inch. For some other instances - absolutely. What the software did in Studio C was pretty incredible. I cannot attest to all of the possibilities of this software but this is my story and that software is in the Startup items in Studio C.