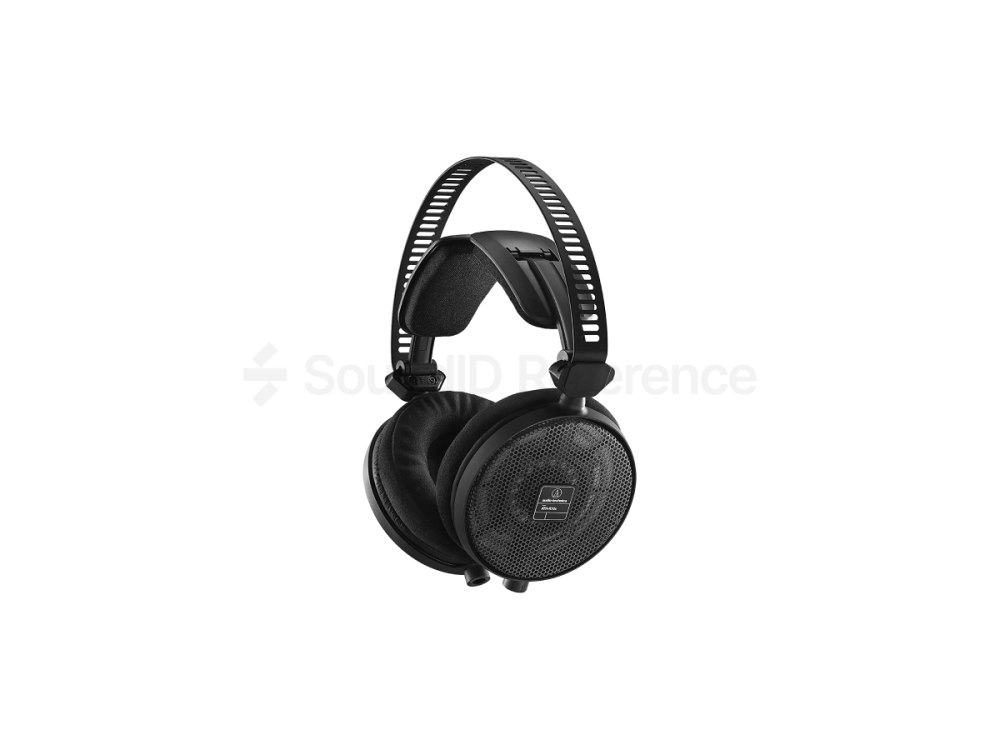 In these headphone reviews, we love to bring attention to excellent headphones that deserve more of it and Audio-Technica ATH-R70x is a perfect candidate for just that.

With their low THD and exceptional comfort, they give even Sennheiser HD 650 a good run for their money, and given how much we love HD 650, that says a lot. If they can go against HD 650, then they’re among the very best. Read on for an in-depth look.

Despite the fact that these headphones are obviously designed for studio use, and the combination of very high impedance and quite low sensitivity, ATH-R70Xs deliver surprisingly adequate SPL even when driven by a laptop and having calibration enabled. The fact that there’s relatively little calibration needed leads to only 6dB drop in volume due to Safe Headroom feature when you’re using these headphones with SoundID Reference and that helps to maintain volume even when used with calibration.

While it’s clear that their place is in the studio, they can also be used for a mix check on a laptop. 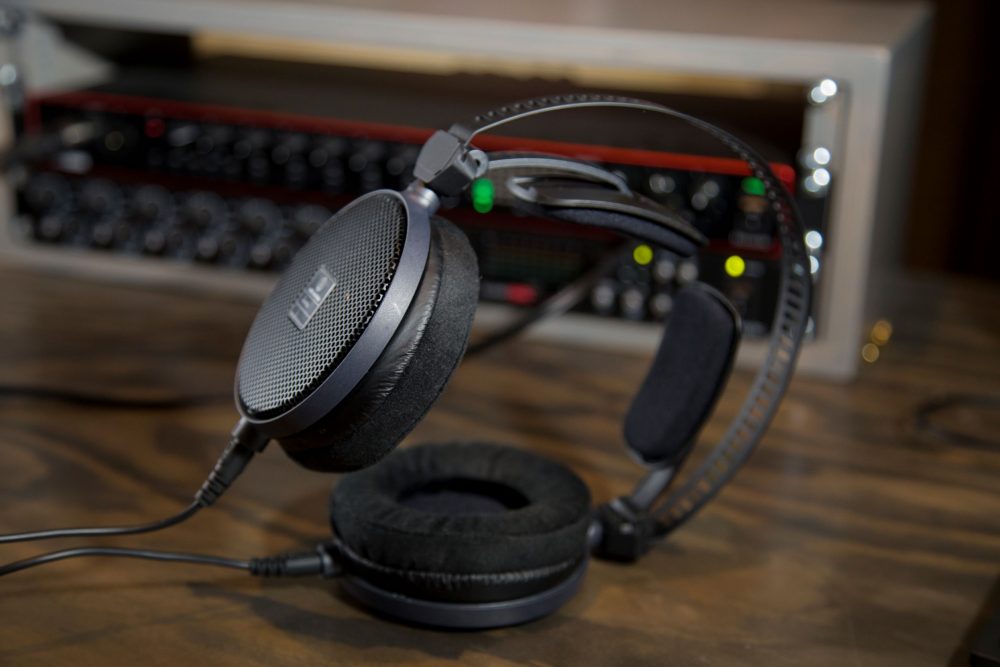 ATH-R70x certainly has a unique look with its “3D wing support system” instead of the conventional headband, but it’s a no-nonsense design that pursues low weight and comfort for extended sessions in the studio. More on the comfort later, but they really are very light at 210 grams. This can be attributed to the use of the materials, apart from the aluminium ear cup grilles and the slender headband bow, the rest of the visible parts are plastic. This does come at an expense though –  the build feels far from robust and seems to require some care when handling. Maybe it’s deceptive, but these don’t feel like headphones you can just throw in a backpack along with other stuff and expect them to be in the same condition afterward. Additionally, the premium and nice feeling material that’s used to cover ear pads attract hair and dust similarly as Alcantara does so they’ll require some maintenance to keep them looking fresh. Quite a disappointment is how susceptible to scratches are the metal sheets on the ear cup grilles that bear the Audio-Technica logo and ATH-R70x model name. 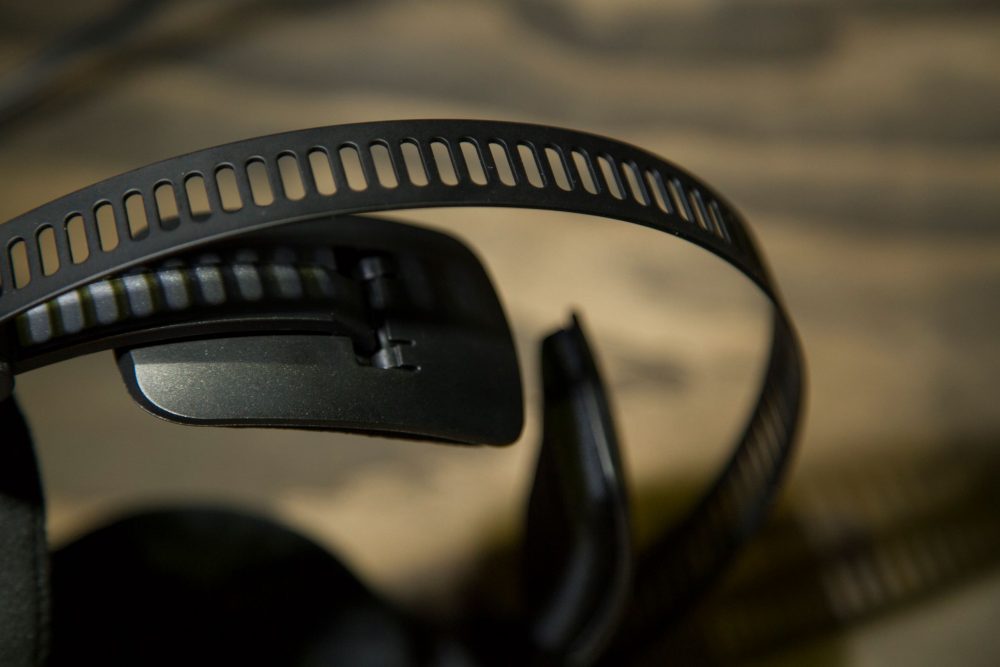 The untraditional headband isn’t the only unique feature of ATH-R70x – the cable has no designated left and right channel. The potential for user error is eliminated, as either way you connect them to the headphones, the left channel will always be fed to the left earcup and the right one to the right. This is achieved by sending a stereo signal to each earcup and separating the channels in the headphones. It’s a neat feature but it will limit aftermarket cable options, and the only one that’s in the box is a 3-meter straight cable that may not be the best option for every setup. 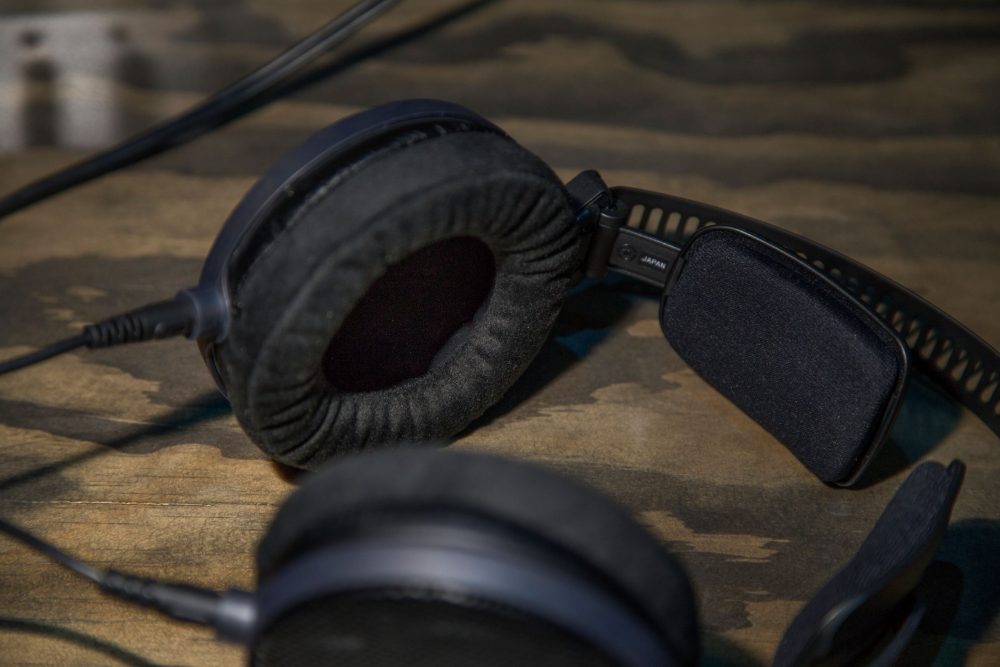 This is one of the most impressive headphone perceived acoustic power frequency response graphs you’ll ever see and very few headphones can compete. An incredibly vast range of 50 – 6000 Hz is almost contained within in +/-1dB span, meaning that upper bass and whole midrange will sound spectacular, very close to perfectly flat even before calibration.

Yet there are two ranges where ATH-R70x come short. The weakest point, that is most noticeably affected by calibration is the rather bright high frequency increase. It’s nowhere near as bad as some rivals, for instance, Beyerdynamic DT 880 Pro, but still very apparent. And the other shortcoming is the suboptimal low-end response, but that’s typical for all dynamic open-backs and is on par with Sennheiser HD 650. 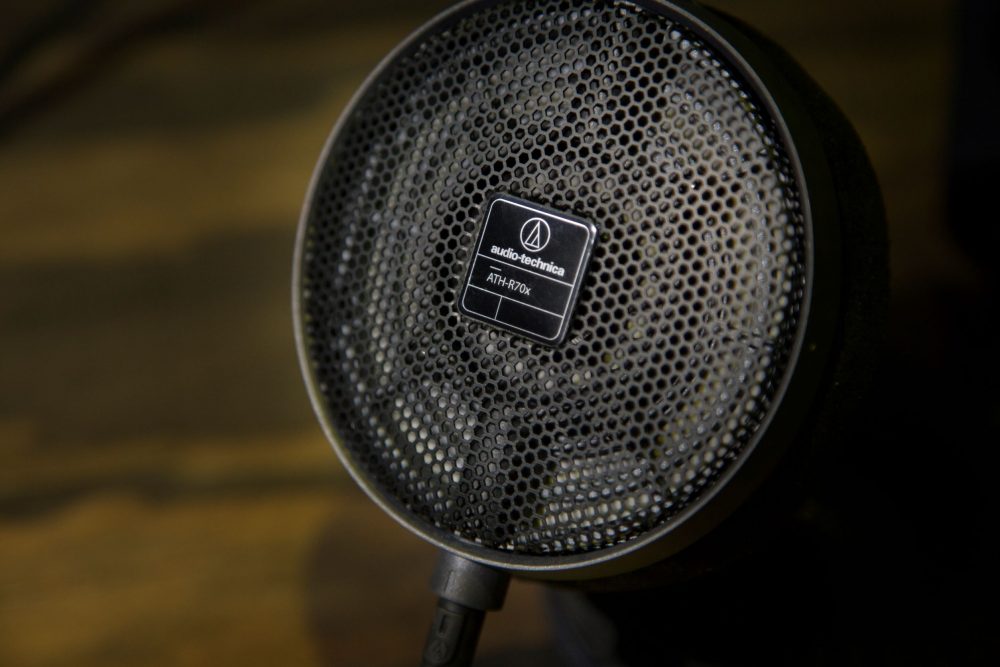 In most cases left and right channels are matched evenly almost through the entire spectrum, with just some relatively narrow bandwidth inconsistencies above 8kHz for few pairs. These issues are really minor and shouldn’t cause issues. 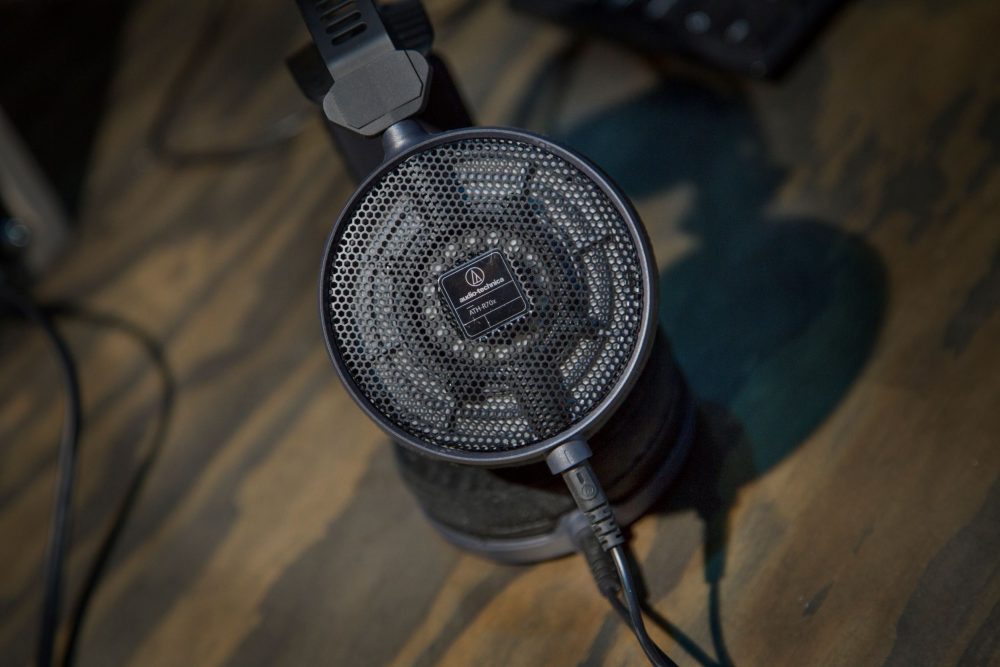 Most of our testers were impressed with how comfy ATH-R70xs are. The “3D wing support system” – the two parts that rest against the top of the user’s head does a great job at evening out the pressure. The earpads are plush and conform to the shape of the head nicely. Combine that with the lightweight build and you have headphones that can be worn for hours on end.

One of our testers though had a problem with headphones sagging over time – the headphones failed to deliver strong enough clamping force and the 3D wings alone couldn’t support the weight of headphones. If your head size is on the smaller side, this can be an issue. Maybe it can be remedied by bending the headband bow, but we didn’t try to do that.

In regards to the earpad size, some reviews online go as far as describing these headphones as being something in between over-ear and on-ear design. While it’s true that the ear pads aren’t as roomy as say Beyerdynamic DT 880 Pro, but they could accommodate even the largest pinnas of our testers, without exerting pressure on the outer ear.

If the Audio-Technica ATH-R70xs aren’t too large for your head size, then there’s a good chance that they will be more comfortable than Sennheiser HD 650, Beyerdynamic DT 880 Pro, and any of the AKG offerings. But as with any headphones, it’s best to try them on yourself. 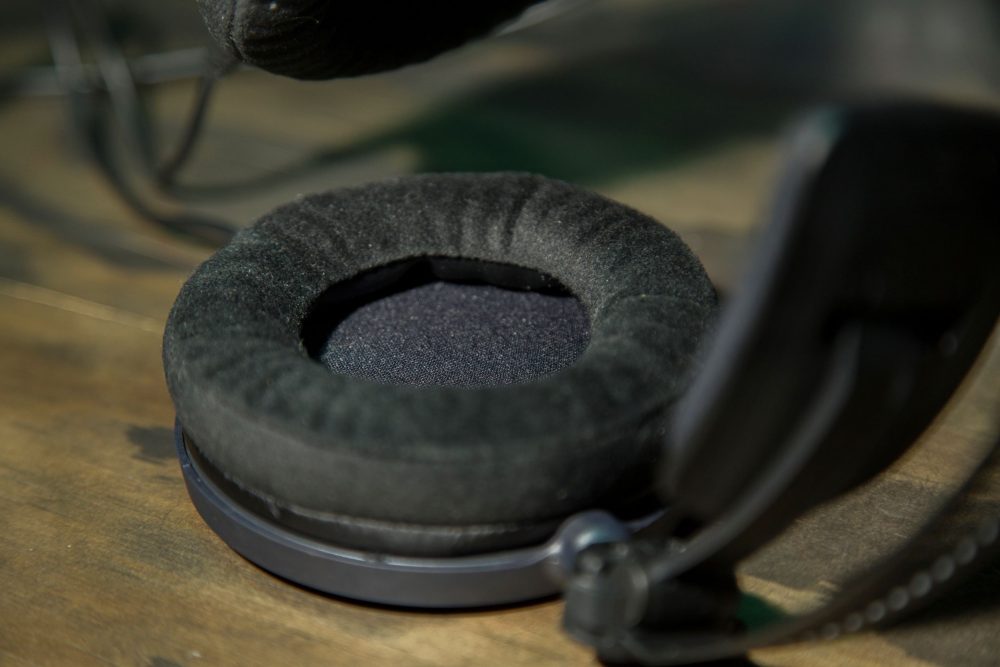 At €300 in Europe and $350 in the US, they ain’t cheap but do deliver on all fronts and are among the best open-back headphones money can buy, and from that perspective, the price seems reasonable and adequate. When compared to its rivals, they’re about on par with Sennheiser HD 600 and are more affordable than Sennheiser HD 650. If you’re in the US though, Sennheiser x Massdrop HD 58X and 6XX beat ATH-R70x when it comes to value per dollar. 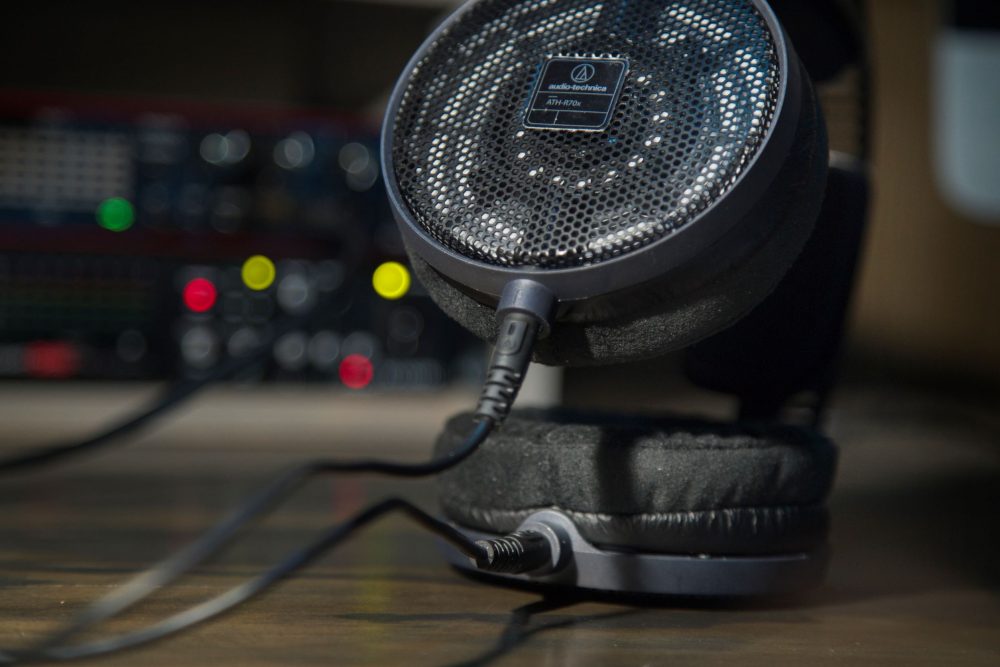 As per usual with open-back headphones, the very bottom of the spectrum sees an increase in harmonic distortion, especially with the calibration applied since no open design can provide enough sub bass and the boost leads to a less pretty THD graph. When compared to HD 650 on paper, these Audio-Technicas appear to be considerably cleaner in the sub bass, and in listening tests most listeners report a very slight subjective difference in sound quality in favor of R-70x, but it’s unclear if that can be attributed to the lower THD, transient response or something more elusive.

How accurate and consistent is the correction effect among different listeners?

A very high score here! When it comes to adaptiveness, Audio-Technica ATH-R70xs are near the top, yet not as amazing as Sennheiser HD 650 and some little inconsistency among different listeners can be expected.

How much do they differ pair to pair in terms of frequency response?

Manufacturing consistency is very good. All measured pairs match very nicely, with differences not greater than about +/- 1.5 dB throughout the spectrum.

Adaptiveness shows how capable these headphones are at delivering the same perceived frequency response to any listener. Headphones with high score will sound nearly identical to everyone.

Channel balance – the closer to identical the frequency response of both channels, the higher the score. Individual calibration delivers perfect channel balance.

Comfort – shows if headphones can be used for long listening sessions comfortably. Every model is tested by at least a few individuals.

Build – evaluates how well the headphones are put together, the materials used and indicates the expected longevity. Easily replaceable (and easily available) parts will boost the score. We don’t do any stress tests and very few models are used for longer than a couple of days, so this is a fairly subjective score.

Value – indicates the price-performance ratio of the given headphones and how they stack up against the competition. High score means that you won’t find more neutral sounding alternatives for the price.

These are among our favorite headphones and they provide very stiff competition to Sennheiser HD 650. For many people Audio Technica ATH-R70x can be more comfortable than HD 650 and they also have lower THD figures. One aspect where Sennheiser wins is adaptiveness – HD 650s are better at delivering consistent sound to wide variety of listeners. So when comparing both headphones with calibration enabled, HD 650 will be a tiny bit more accurate than ATH-R70x, which gives them an edge overall, but it’s a very close call. Audio Technica ATH-R70xs are among the best studio open-back headphones ever made.

For more information about Audio Technica headphones, please read our other reviews – ATH-M20x, ATH-M40x, and ATH-M60x

To calibrate your existing headphones, purchase our headphone calibration software in our store.

Remove coloration from your headphones with SoundID Reference from Sonarworks

View all posts by Indrikis 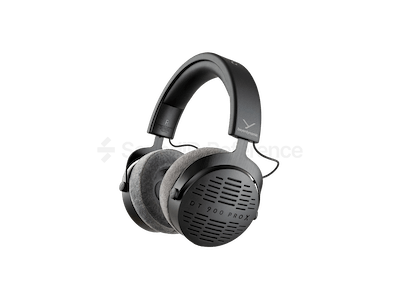 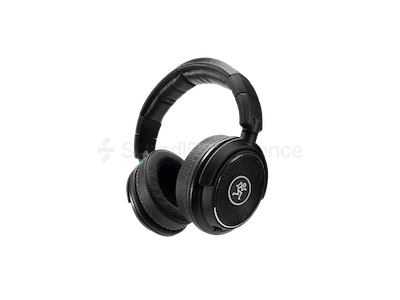 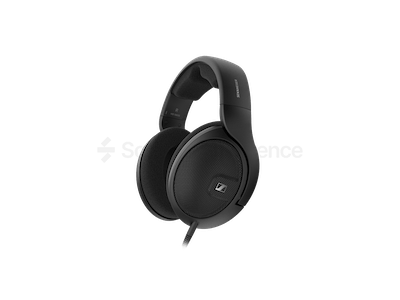