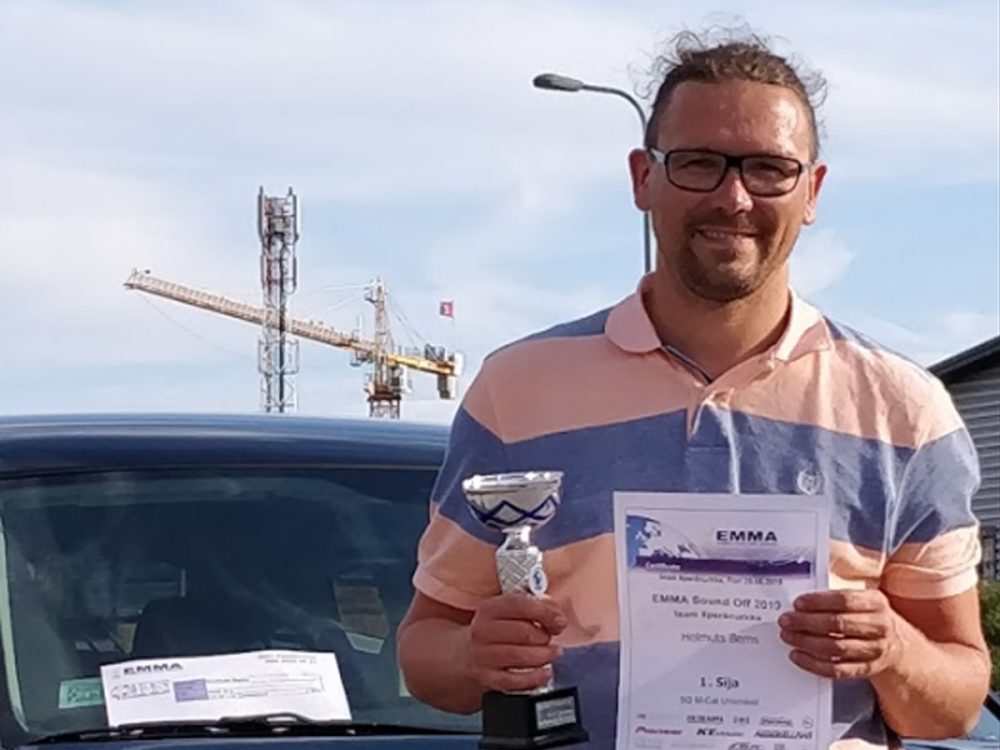 Our CEO Helmuts just came back from a well-deserved vacation and despite our direct orders to get a good rest, he’s been very busy! We all knew that he’s a car audio nut, but now it’s no secret to even the best car audio gurus of Northern Europe. He took his 2007 Saab 9-3 to Finland where European Mobile Media Association (EMMA) was holding their car audio competition. What came back was a 1st place prize and a realization that car audio has still much to learn.

Luckily, I was able to catch Helmuts in his busy routine to get some war stories from his Finland adventure!

What exactly is EMMA and what happened in Finland?

The European Mobile Media Association is the main European organization which promotes all things related to in-car audio and visual entertainment. EMMA has many regional chapters and they do car audio competitions from time to time. These competitions are held in two categories – sound quality and maximum sound pressure. SPL is pretty straightforward, these guys compete whoever makes the loudest sound at a set frequency. I competed in the SQ category where car audio systems are judged mainly in terms of sound quality, but you also get points for installation and presentation as well.

Well, I did lose points because my presentation poster wasn’t on a neat stand! To be honest, I also used to think that these points for installation are rubbish, but get this – everything in a car runs on 12 Volt power. Want to run a 1200W amp full-swing? Your power lines need to able to carry 100 Amperes. This is serious high current stuff and should the isolation fail on a cable, it will instantly weld itself to the chassis of your car and cause a fire. So you need proper installation and fuses. This is where I lost most of the points, because my installation is safe, but it doesn’t look professional enough.

So tell me, how are the SQ cars judged? Do they measure or listen?

This is what impressed me the most. EMMA judges have a very rigorous framework how they judge sound quality. And no, they only do SPL measurements for SPL participants. To become an EMMA judge one has to go through a training course and prove their listening ability and technical prowess. To find out whether a sound system cuts the mustard they use a test CD. And it’s not something like Diana Krall or Random Access Memories, it’s full of nasty sound samples designed to bring out shortcomings in audio systems.

Sort of. There’s a type of test that’s used for examining the imaging. It’s basically a vocal sample panned in 5 positions, so the guy listening takes notes whether it changes, depending on position. They also take notes whether apparent elevation changes, depending on the spectral content. This is very hard to get right, because only tweeters are usually mounted in windshield stands. Some then try to run the tweeters lower, so they play more mids, others put mids there as well. Then you get a nightmare of reflections due to all the windows. It’s tricky. One discipline where I lost a bit of points is soundstage width. The judge basically told me that it’s excellent for a narrow car like my 9-3, so to get more I’d have to buy a wider ride. They also judge the frequency balance of a system, where I got very high marks. My sub was a bit too loud, so I didn’t get max points. And they also give points for general joy of listening, which is where I did get the maximum possible.

As if! Driving to Finland was a nightmare. Nothing sounded right, because my car was full of luggage and the system was tuned for an empty car. I was convinced that I’ve somehow blown one speaker and overall I wasn’t in high spirits. Once I got to the venue I emptied the trunk and found out that luckily a only cable had come loose from one of the speakers and the driver itself was fine. I had about 5 hours until my turn would come to show off my system, so I also walked around to check out my competitors setups. Let me tell you, there were some cars where you could see that there was a truckload of money spent. Sadly, many of them fell flat once I sat down for a test listen. That’s not to say that there weren’t impressive systems. I was able to find out who would be my main competitors. One of them was even an EMMA judge himself. They also checked out my ride, but weren’t too impressed. They remarked some things and I took notes. The brains of my system is a regular computer which runs a Reaper DAW where all of the filtering takes place via plug-ins. To re-tune a regular competition vehicle it would take hours, for me it was a matter of readjusting an EQ plugin.

Why weren’t the other guys impressed?

I guess my setup wasn’t fancy enough. I run an active 4-way system which consists mainly of Dayton Audio drivers which retail for like 50$ each. The amps are also pretty pedestrian, cost like 150$.

What about your beastly JBL sub?

Yeah, we agreed that I had a slight rattling noise in the front doors. I tried to pry some info from them on what to improve further, but they basically said to leave it alone, lest I make something worse. Kinda agree with that.

So, what was the final score?

Generally it goes like this for these competitions – 250 points is considered very good, 270 is usually the winning score and 280 is the “dream-on” zone. Last time the winner got 270 points. So get this, they’re announcing the scores and 3rd place gets 275 points and 2nd place a whopping 282, which previously was considered impossible. Everyone’s jawdropped because this barrier has now been broken. Now I look at the face of the guy who got second place and it’s full of disbelief as he has just realized that only my name is left on the list. And I got 286 points, a highest score ever recorded in Finland.

How did your competitors react? I mean, you were the textbook underdog if there ever was one.

I could sense some bitterness in the 2nd place guy’s look. After all, he’s an EMMA judge outmatched by some first timer rookie. Just don’t think that I’m talking them down, the 2nd and 3rd place are both experts and we’re all passionate about good sound.

Really, this was your first time?

Yeah, I had visited an EMMA competition in Estonia a few years ago, but then I was only spectating.

What was the secret sauce behind your victory?

I have full digital control over most aspects of my system. And I base my designs on measurements. This allows me to select speaker drivers, without taking into account things like frequency response flatness or sensitivity. For me it’s more about low distortion and maximum SPL, the rest can usually be fixed by digital calibration. It’s also the reason why I got away with using these affordable drivers. The two guys who placed 2nd and 3rd were using super expensive drivers from Scan-Speak and Accuton. Design-wise it’s two completely different schools of thought.

So, you just measure and don’t listen at all? Come on…

I listen for the very final soundstage adjustments. Haven’t really found out how to do them by measurements only. Everything else is based on measurements. I have tried doing it by ear, but it’s a never ending struggle which takes tons of time. I talked to other guys in the competition on whether they measure their systems and some do, but it’s very simple, compared to how say our Reference 4 software does. If you leave data crunching to the computer the result can be much better, because the data volume can be extremely high.

Didn’t it seem unfair to use Reference 4?

Honestly, the guys who took 2nd and 3rd place had way better setups than I did, yet they stood no chance. They brought knifes to a gunfight.

Could a stock car with a factory installed sound system use calibration?

Sure, do the measurement with Reference 4 Measure and then run the calibration on a smartphone via an app. Heck, we could get a rental car next time and use that. There’s a special class in these EMMA events where only stock vehicles are allowed to compete. I’m certain we’d absolutely smoke the competition. And I wouldn’t lose any points for installation tidiness!